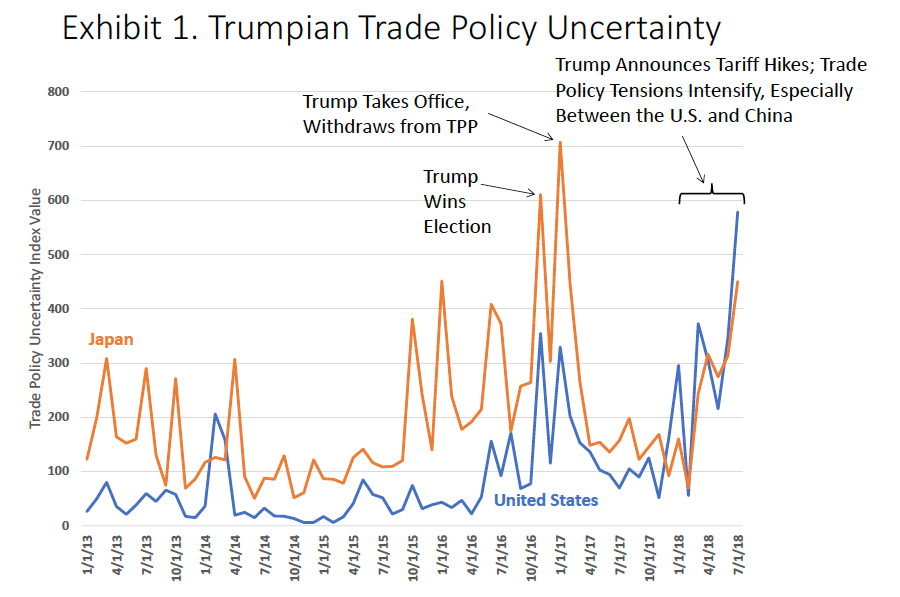 quantifying economic uncertainty due to the trade war, and its emerging impact on investment.

Steve (and Nick Bloom) have done a great job quantifying policy uncertainty over time. To be clear, policies can have two effects — there is the certainty of damaging policy, but there is also the damaging uncertainty of what policy will be. If a trade war seems to be looming, and you don’t know if you will get tariff protection (raw steel) or be hurt by the tariff (steel users, competing with tariff-free steel products from abroad), that’s uncertainty. Businesses hold off investing when they know things will be bad. But they also hold off when they’re not sure what will happen. That’s uncertainty.

Our little (so far) trade war is full of uncertainty

Trade policy under the Trump administration also has a capricious, back-and-forth character… Less than three months after withdrawing from the TPP, the President said he would consider rejoining for a substantially better deal, only to throw cold water on the idea a few days later. Initially, the administration justified steel tariffs on the laughable grounds that Canada, for example, presents a national security threat. Later, President Trump tweeted that tariffs on Canadian steel were a response to its tariffs on dairy products. Some countries get tariff exemptions, some don’t. Exemptions vary in duration, and they come and go in a head-spinning manner. Two days ago (August 10), the President tweeted that he “just authorized a doubling of Tariffs on Steel and Aluminum with respect to Turkey” for reasons unclear. For a fuller account of tariff to-ing and fro-ing under the Trump administration, see the Peterson Institute’s “Trump Trade War Timeline.”

The arbitrariness, including the waivers, means

Crony capitalism, political favoritism, and extra sand in the gears of commerce – here we come!

But to the point, what’s the Davis-Bloom quantitative measure of uncertainty doing? Answer: it is higher than even around the election — whose outcome, and the nature of the Trump presidency certainly led to a vast amount of uncertainty.

As of July, this uncertainty is only having a small effect on investment, and the economy is still booming — in my view from the corporate tax rate cuts and deregulation efforts. It is true that the US is so big that most of the economy does not live on exports or directly compete with imports.

But it could get worse. Steve closes with a nice list of recent trade outbursts from our part of the economics blog world:

In closing, I should note that the harmful consequences of tariff hikes and trade policy uncertainty extend well beyond short-term investment effects. For other critiques of the Trumpian approach to trade policy, see the worthy commentaries by Robert Barro, Alan Blinder, John Cochrane, Doug Irwin, Mary Lovely and Yang Liang, Greg Mankiw and Adam Posen, among others.

via The Grumpy Economist https://ift.tt/2An2D9g